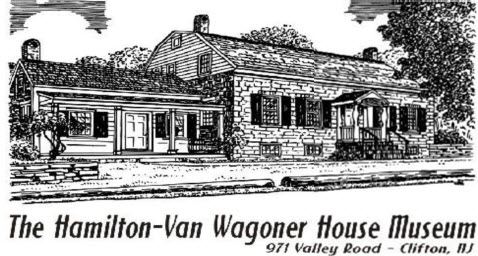 Welcome to the Hamilton-Van Wagoner Museum.

We hope to provide you with a refreshing glimpse of the past. A journey back in time and place -not just to see, but to feel how our forefathers lived. The museum mirrors the growing up of our nation with all its courage, imagination and vitality.

This 18th Century Dutch gambrel-roofed homestead, was once the home of the Van Wagoner and Hamilton families. The basic plan of the house does not greatly differ from its Dutch antecedents.

The sturdy one and one-half story cut sandstone structure, flanked by a grainery, spring-house and gardens, reflects almost two hundred years of American history. It brings back memories of an uncluttered horizon with farms, orchards, fresh brooks, forests full of game and filled with the scent of wildflowers.

Although the city of Clifton was incorporated in 1917, a community had existed since 1679. Prior to 1917, the area was known as Acquackanonk Township and included parts of:

The Indian Chief Captahem deeded 11,000 acres to the early Dutch settlers on the shores of the Passaic River. Predominately rural, this sparsely populated village thrived and grew.

The farmhouse was presented to the City of Clifton by the developers of the property of the late Harry Hamilton. The Hamilton family had bought the 96-acre property in 1856 and for over 100 years until the death of Mr. Hamilton in 1970, it had been the home of the family.

The house was moved to its present location Surgent Park in 1973. Infinite plans have been taken with examination and documentation of the building's structural elements. Extensive research has been conducted, including the records and treasured memories of Miss Caroline Hamilton, as well as:

The museum is opened for tours on Sundays from 2 to 4 p.m. (except for holidays) from March through December. Tours at other times may be made by calling the museum at 973-744-5707

There are various programs and events through the year, Contact the Museum for further information.

Agendas & Minutes
Follow city board meetings.
Online Payment
Pay Taxes, Sewer Bill and Traffic Tickets.
DROP BOX FOR PAYMENT:  A mail/payment lockbox is now  located in front of the entrance of City Hall.  NO CASH PLEASE.  Tax Collector will empty lockbox Monday through Friday.  Payments dropped off after 3:00 pm will be processed the next business day.
CORONAVIRUS
City of Clifton's Latest Information on Coronavirus (COVID-19)Click Image For More Information
Budget & Financial documents
Click here for Budget and Financial Documents
Sign up for Swift911 today!
In an effort to get the latest to All Clifton residents; please sign up for Swift911! Text Swift911 to 99538 or click on the red circle to get started.
Report a Concern
Do you have a request or concern?